Hair transplantation by the AHT method is a completely painless procedure without any swelling even after the procedure. Not even after the effects of the local anesthetic cease. Previous methods, such as the FUT method, also known as the STRIP method, were rather painful and invasive. Due to unsatisfactory results, there was a constant effort to improve and achieve a better and more natural result.

Linear scar, swellings followed by pain and thread wearing, were not the only problems of the FUT method of hair transplantation. Results itself was unnatural and postoperative period was long. In most patients, dissatisfaction was exclusively related to the unnatural appearance, which forced the patients to return to the clinic.  It was wasting of time and money to go through the painful procedure again.

The latest AHT hair transplant method avoided all disadvantages, such as pain, swellings and scars. It has also prolonged the vitality of follicles by applying the latest innovations. By introducing new Bio elements in the procedure itself, improving the method of handling and depositing follicles. The percentage of great performance has increased to over 91%, which is more than any other method that is being applied today.

The first step is to call the clinic and schedule a consultative exam. At the very examination, hair density per a square centimeter is checked with a SYS-COS camera, which is software-linked to the computer, the donor area is estimated, insturctions for the preoperative course are given, and plans regarding the best course to take and how to treat the hair later are made. Information is also provided on how to stimulate the existing follicles that have grown thin to re-strengthen them and obtain the desired volume and shine.

According to the studies conducted, the hair density in the donor area, from which the follicle is taken, is between 90 and 110 hairs per square centimeter, while the follicle density is significantly lower in the frontal region. The follicle usually contains 1 to 4 hairs in one root (follicle).

For the frontal line, the follicles which contain one hair are selected to make the appearance completely natural. The follicles with 2, 3 or 4 hairs that contribute to better density are not visible in the central part. 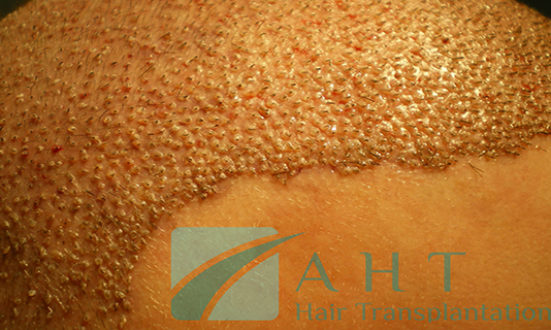 During the intervention itself, a special tweezer is used with which the follicles are taken out without damage. The instrument is designed to take follicles, ideally, at a certain angle without damaging it. The follicle is then deposited in the Petri cup or immediately inserted into the implant depending on the type of skin and the extent of the intervention.

During one procedure, up to 3,500 hairs can be taken undamaged, and anything above this bears the risk that the follicle loses vitality. Any number larger than that is considered useless unless the Bio elements were used. However, by introducing the APTV element in combination with the S.A.F.E HEX system, we can extract up to 5,000 hairs in one procedure. That fact also distinguishes us from other clinics which are performing similar procedures. The priority of anyone who wants to do any aesthetic surgery has to do with a qualified personnel, in this case the doctor who performs hair transplantation, his experience, and the results he has behind him.

Hair transplantation on other parts of the body

Apart from hair transplantion, it is possible to transfer follicles to the eyebrows, chin and chest. The hair is taken from other parts of the body and implanted in the region where it is necessary. In the back area (near the neck), the hair contains slightly more fat in the root structure, so it is avoided to transplant it into the front of the head. It is therefore always advisable to come to the clinic to make an assessment of the donor part.  Sometimes the donor part is not good enough to overcome the problem. In that cases, hairs from other parts of the body have to be used to achieve the best result.

Other Hairs Used in Hair Transplantation